I heard about black bean brownies about 4 months ago and have been wanting to try to make them. The real reason I wanted to try them is because I am always looking for ways to get us to eat healthier, especially my hubby, who is generally opposed to many foods (you call that a picky eater!).

I knew I couldn't make them while he was home, or he'd figure it out and not get near them (He doesn't like beans of any kind, unless they are green beans.). I knew I had to make them at a time when I could use the food processor, clean it,and put it away before he wondered why I used a processor to make brownies. I had to be very sneaky!

The recipe is very simple, but since I had to be so sneaky about it, I had to wait until just the right time to make them. Yesterday I was surprised to find I had the day off (no electricity at work means no work for Susan!). CC was at work so this was perfect!

The recipe tells you to puree in a blender a regular sized can of black beans and then mix that with brownie mix and bake according to the brownie mix directions. Easy peasy! I read a few of the comments which suggested draining and rinsing the beans, then adding clean water back to the can before pureeing. That sounded really smart so that's what I did.

I tasted the raw batter to see if I could tell the beans were in there and it tasted yummy, like normal brownies! They smelled normal while baking, looked normal, and were DELICIOUS!

The trick is to let them cool completely before eating them. They don't taste beany if they're still warm, but it is an odd taste along with the chocolate flavor. We both loved them and CC never knew how healthy the brownie was (The mix was reduced-fat, so he thought that's why I called them 'healthy brownies!').

Well me being me, I couldn't keep that secret, so I finally confessed later last night. He guessed and guessed what was in it, and finally after about 15 minutes of straight guessing, he couldn't believe it!

If he can get past the mental image of his eating beans, I think we have a new favorite recipe! The brownies were very cake-like and extremely chocolatey (Chris said he couldn't even finish one they were so rich to him.). I prefer my brownies fudgey, not cake-like, but for a healthy brownie it was amazing! Even I was pleasantly surprised.

Of course, now he's on to me, so we'll see if I can continue to be sneaky without his suspecting me!
Posted by Susan at 9:26 AM 1 comment: 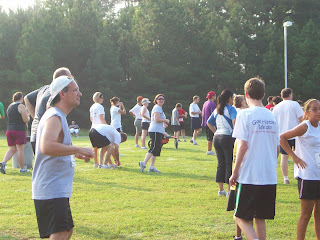 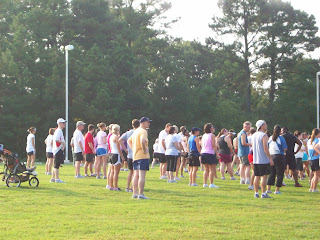 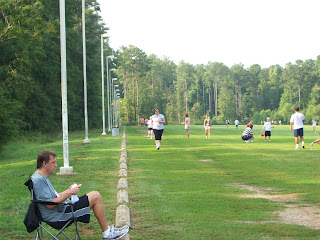 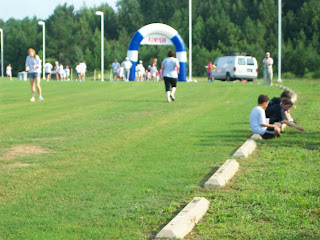 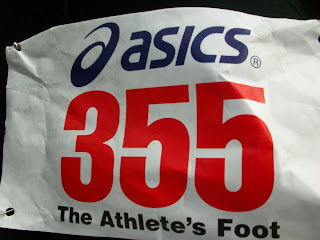 This morning I ran my very first ever 5k. Okay, well I walked/jogged/ran it, but I finished! It was definitely a comedy of errors that occurred, but to repeat, I finished it! My sweet hubby went with me for moral support which I greatly appreciated. Many friends called or emailed to offer support and prayer. I felt very loved going into it, so thank you.

We left early this morning to get to the park in plenty of time to spare. The idea was to arrive with a full 30 minutes before the run so I could check in, stretch, warm up, etc. Well Google maps let us down and we were given wrong directions! Fortunately I had the website printed so I called the only number I could find which happened to be a cell number (What did we ever do without cell phones?!). The poor man on the other end was super nice and tried to be helpful, but he couldn't tell me directions. We ended up using the GPS on my phone to figure it out and finally arrived-- with 5 minutes until the run!

CC peeled into the parking lot and I practically jumped from the car to check in in time to run. I got checked in and CC made it in time to see me take off. The course was not well marked to me and extremely confusing for a beginner. They had us run one way, do a loop, run another way for a LONG time, then you ended up back where the beginning was to finish.

Well I did my loop and headed back to the finish line and was offered water. Twenty minutes to run a 5k seemed too good for me, so I spent about five minutes trying to figure out how I was already done. I found CC and he helped me realize I was only halfway done! But where did the other runners go?! I couldn't see anyone else running, so my sweet support sent me in the right direction and having lost only five minutes, I started back again! Yep, only Susan would take a 5 minute hiatus in the middle of a 5k! :-P

The second half was much more difficult than the first half. The course was not at all what I was expecting, because I figured we'd be running on sidewalks around the soccer fields. Boy was I oh so very wrong! It was a CROSS COUNTRY 5k! We had no pavement at all and ran on sand, dirt, gravel, grass, anything but the smooth concrete I was expecting. Oh what a funny day!

I did finish in about 45 minutes (still waiting to find out my official run time), not including my little break in the middle. Everyone was super nice and helpful, but I am looking forward to doing my next 5k with a little more preparation beforehand!
Posted by Susan at 10:06 AM 2 comments:

Once each month the staff all gets together for Chapel and lunch. I really enjoy this time each month to come together as co-workers serving Jesus and do a Bible study together. I especially enjoy lunch because everyone comes out, no matter what's going on (Hey, nothing brings together the body of Christ quite like free food! LOL).

Today's chapel discussion was based on Ezekiel 37, where God has Ezekiel prophesy for the dry bones to become flesh and live again. We then had interesting discussion based around how to prepare, pray, and practice our relationship with God. One point that one of our pastors made was the following:

Well I don't know about you, but I thought this was a pretty mind-blowing thing to be reminded of. So from now on when I ask you how you are doing, please hear the intent behind it-- I want to know how ALL of you as a whole is doing.
Posted by Susan at 2:10 PM 1 comment: 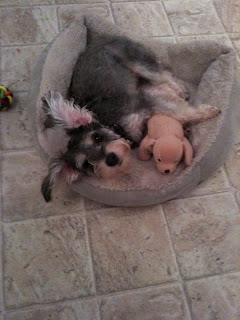 I wanted to test to see how easy it is to upload photos to my blog now that I'm using Blogspot behind the scenes. This is a picture of Scout last year. I wish she hadn't grown into her ears as much as she has. Her ears are still full of personality and bigger than her head, but don't you think she's just adorable here?!
Posted by Susan at 2:49 PM 2 comments:

Well today marks the end of an era! Okay, not really, but this morning I did finish the last day of my Couch-to-5k app. It took me all summer (vs. the 9 week allotment for the program), but I did it which is all I care about!

Saturday I will run my first 5k, or at least try to run the whole thing. I think if I do well I can run two of the three miles, then walk the rest. At least I can feel good knowing I'll have tried and finished, one way or another.

Every day that brings the 5k closer is getting me more and more excited! I am also thrilled because it's supporting pro-life (anti-abortion) ministries here in our community. I am not a hard-core-yell-at-everyone-who-disagrees pro-lifer, but I am happy I can support something so important to me and get a little exercise in too.
Posted by Susan at 9:30 AM 1 comment:

Um, Did You Forget Something?

Okay on the way to work this morning I swear I saw a hand on the side of the road. I am praying and hoping it was some poor construction worker man's work glove, but it was positioned in such a way that it really looked like someone detached and left their hand in the rain by the road. Very creepy!
Posted by Susan at 8:30 AM 1 comment:

Well, I have officially begun my last week and countdown to running my first 5k!

It's this Saturday and I am pretty sure I won't be able to run the whole thing, but I am looking forward to trying. Or more realistically, huffing and puffing my way slowly through all agonizing 3.1 miles until I collapse into a sweaty, soggy, red-faced puddle at my dear husband's feet.

(He is going just for moral support. He has no idea why anyone would willingly move any faster than a comfortable snail's pace unless immediate death was imminent.)

Back to the countdown: I ran this morning after a nasty cold took me down for almost two weeks, and the passing out at the end really helped revive me! I am hoping to see how far I can run outside tomorrow after work(without my beloved music). I have grand plans to run Wednesday inside again before work to officially close out my Couch-to-5K app on my iPhone (I have one day left currently.). Then I hope to rest until Saturday's morning run. We'll see how things go with my hard-core mini training regime! My beloved hubby seems to think that might be pushing it, and he's usually right about these things.

I haven't updated in a while simply because, while we are extremely busy, it's just more of the same. Who wants to read about that?! However I have been asked to update, so update I shall! And with that, the catching up begins!

We sold our house in May and moved to the apartment neighborhood we lived in just before we bought our house four years ago (I know, funny.). We are very much enjoying everything about it, especially the much shorter commutes to work. The only real bummer about where we live now is that Target is a farther away drive than the five minutes it used to take (yes, it is now a whopping ten minutes away).

Scout is doing well and as cute as ever.

CC and I took our first real vacation last month. We had a blast at a theme park and a water park and a colonial area. Our favorite thing we did was to go on a dolphin watching tour. We saw many dolphins and a really cool thunderstorm with lightning and thunder and monsoony rains (yes, all that on a metal boat in the middle of the ocean!). It was an amazing testimony of God's awesomeness! I can't wait to do it again.

Things are crazier than ever at work for both of us, so our joke is "See you in November!" (when things calm down, sort of, for both of us) :-D

Well, I guess that's about it for now. Oh and I am running a 5k next week. Very nervous and doubtful I'll be able to run the entire thing, but it's a start!

Oh and I turned a big number last week! We had a party with friends and celebrated with Hand & Foot and sangria! A very fun way to celebrate, I thought.
Posted by Susan at 3:48 PM 1 comment: