Despite having had surgery to correct a deviated septum when I was younger, I have remained chronically stuffy. Several of my adult female friends have discovered the answer to many of their healthy problems boiled down to simple food allergies.

While at the doctor a few weeks ago, I asked her if it would be possible and worth it to get tested just to see if that's why I am usually congested. She had me tested and yesterday my results came back.

I am very mildly allergic to cow's milk, eggs, and peanuts. Fortunately these are very mild allergies, but she suggested I could cut these things out and see if it helps, which I plan to do. The good news is I'm not a big fan of peanuts or peanut-related foods, so I wasn't too heartbroken over that. The cow's milk and egg situation is much more scary to me. I'm not sure how to completely eliminate those two items since they exist in so many foods.

I'm going to try, and the first step was trying soy milk in my mocha this morning. The barista let me taste the soy milk first to decide if I wanted to order it in my mocha. It was vanilla flavored and surprisingly VERY good! I loved it and immediately asked for my mocha with soy milk. Not sure if it was being heated up for a hot drink or what, but I hated it in the mocha! The aftertaste grossed me out and I couldn't even finish the drink. Sadness.

At least I experimented (might try it iced next time to see if that helps), and will continue to try to eliminate the milk and eggs to see if it helps.
Posted by Susan at 8:53 AM 1 comment: 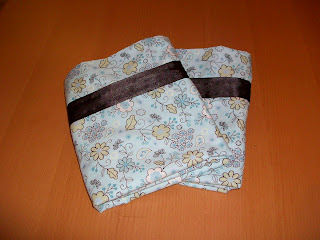 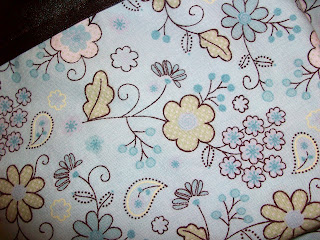 I have been asked to teach sewing to some teenager friends of mine, as part of their extracurricular activities for homeschool. Their mother and I thought it'd be a great idea to start with a pillowcase, since it's pretty easy and the girls are redecorating their rooms now that they are in high school (older).

Me wanting to be a good teacher, I wanted to make one first so I know what I'm teaching. I haven't made a pillowcase since middle school (more than 15 years ago), but I remember it as my first sewing project and I remember too that I loved that pillowcase. What a sense of accomplishment to know you've made something yourself (and the fabric was a super cute stripe)!

I went to the local fabric store yesterday and wasn't impressed with any of the pillowcase patterns I found. After talking with JoAnne (oh the irony!) at the cutting counter, I figured out a way to make my own pattern.

I washed and dried my fabric (1 1/4 yards for a queen-sized pillowcase) yesterday and started today. I finished two pillowcases in under four hours! Yippee! If I say so myself, they are super cute! More importantly, I think the girls will be intrigued by the fabric.

So in case you're curious, here's what I did:

I had the idea to add some satin ribbon flowers to the ribbon finish on each pillowcase to add something fun for the girls. I think it might add a feminine touch and still be cute and girly. I ran out of satin ribbon in the cocoa color so I am going back today to get some more to try the flowers.

What do you think? Should I leave them alone or add the flowers?
Posted by Susan at 1:25 PM 1 comment:

Yesterday we paid off another debt that was in the way of being debt-free. Woohoo! We paid it off early and with no interest. This particular debt had set us back about a year on our path to being debt-free. Now that it's done and over, we can move forward finally with paying off CC's car! Yay!

I really look forward to the final day when we can truly scream, "We're debt-free!"
Posted by Susan at 5:01 PM 1 comment:

A Labor Of Love

This past weekend was Labor Day weekend, and we had a lovely time. We made almost no plans, enjoyed time (and Hand & Foot!) with friends, and spent a bunch of time with our little girl, Scout. We were rather relaxed and happy throughout the weekend, until yesterday afternoon. Sigh.

We had decided to take Scout to the dog park yesterday afternoon, thinking tons of other dogs would be there for her to play with, and she would get some exercise, sun & fun, and generally be exhausted (translation: too tired to disobey!) after running around. Well we got to the dog park and she had no one to play with! We kept trying to play ball with her but in the end, Scout wanted water and the shady spot on the grass. So much for running her ragged!

When we got home, I gave her a bath (dusty dog park) and cut her nails because they were too long. Well she's fine in the bathtub until I dump water on her head, which she HATES! Once that begins she tries to soak me through and get out of the tub. She accomplished the soaking but not getting out of the tub.

The tragedy came when I cut her toenail too close and she bled everywhere! I thought I'd stopped her bleeding but I hadn't and she bled all over the carpet and Chris and the living room throw we keep on the couch. Poor baby! She was hurting and I felt horrible!

I've cut her nails before but this was a gusher and I felt so terrible! She's okay now but I still feel bad. My aunt said not to let this keep me from cutting her nails again, but I know I'll still be nervous about it.

This made for a stressful and not relaxing evening for me, since I was so (unnecessarily, apparently) worried for her. Turns out to get even, she accidentally peed on our bed. Yep, she did, the stinker! Fortunately we were able to clean it up and remake the bed with clean sheets.

All in all, a lovely weekend, an awful night, but Scout was fine this morning when we left for work. I guess I'm just a little overly concerned, but I am sure she's alright.
Posted by Susan at 10:27 AM 1 comment: 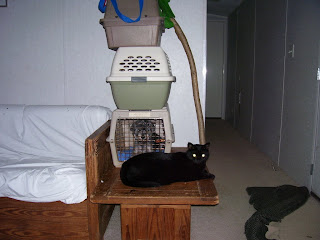 Almost every week Scout goes to my aunt's house for what we call "Grandma Camp." This is a fun visit for my aunt and a much-appreciated break for CC and me. Scout comes home exhausted from playing with Mary's three cats and due to her exhaustion, she is VERY obedient for a couple days after she gets home.

Her best friend in the whole word is her boyfriend, Taz, one of my aunt's cats. They're about the same age (same energy level) and love to play together, chasing and pouncing and biting for days on end.

I thought this was a hilarious picture! Apparently Scout was sent to time-out (or jail, as my aunt calls it) and Taz was visiting. They look like they're talking through the bars!
Posted by Susan at 2:33 PM 2 comments: