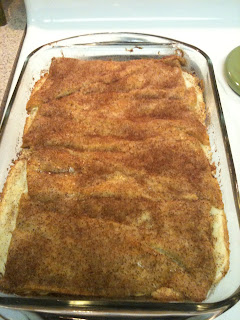 I love trying different recipes and this weekend was no different. To celebrate the 4th, Hubby and I did absolutely nothing. He wanted (needed) a day of total rest, or as he calls it, "doing nothing." I usually have a hard time with this, but managed pretty well... until I realized I cleaned the kitchen several times, baked three different things, and read three books in one day! Oh well. Baking and reading are pretty much my ideal dream day, so I ended the day pretty content.

Sunday we went to a friend's house for a cook-out and cards, to celebrate the 4th. I made Sopapilla Cheesecake for that. Yesterday I made cranberry orange muffins and Fudge Pie Tarts. The muffins were delicious for breakfast, and the fudge pie tarts came about because I had a craving for fudge pie, but had no pie crust (and didn't want to take the time to make any). I only had puff pastry, which I turned into tart dough. This was by far my favorite thing I made over the weekend. LOVE this recipe and never make it enough. Hopefully that will be changing soon as I am pretty sure I could be happy eating just the batter, no baking required. :-P

The Sopapilla Cheesecake was a different story for me (I found the recipe on Pinterest.com.). I preface this by saying that I do not like cheesecake as a rule. However, I do LOVE sopapillas (the Mexican dessert that is fried pastry dough with cinnamon and sugar, and usually honey). This recipe was super easy and I knew I had to test it out though.

I loved the sopapilla part, but of course not the cheesecake part. It was super easy to make, but I can't decide whether or not to keep the recipe. Some people are like me and don't really care, but others are raving about it. My own hubby who was nervous about the cream cheese in it, ate TWO pieces! I was surprised to say the least. He ate it with fresh, in season strawberries and blueberries, and said the cheesecake part became more like a fruit dip, which is why he liked it. Good thought, CC!

Here are my notes from making it:
*I only needed two cans of crescent rolls, not three.
*I added about a half teaspoon of fresh lemon zest to wake up the flavors and add a bit of freshness to the cheesecake flavor.
*My cinnamon sugar ratio was 1 tablespoon cinnamon (I used organic since I had it.) to 1/4 c. sugar.
*I used a 9x13 pan and sprayed it with the flour baking spray first so it'd be nonstick.

Anyway, if you try this, let me know what you think. I'd love some input on whether or not I should hang on to the recipe. (Recipe below)

Instructions:
Unrolled and spread 1 & 1/2 can crescent rolls on bottom of un-greased pan. Combine softened cream cheese, sugar, and vanilla. Spread mixture over crescent rolls. Unroll and spread remaining crescent rolls over mixture. Spread melted butter over the top and sprinkle with cinnamon and sugar. Bake at 350 degrees for 20-30 minutes.
Posted by Susan at 8:49 AM

What a wonderful weekend! Since my hubby hates cheesecake, I probably won't be making this unless I need to take something somewhere. Hanging on to the recipe though. Sounds good to me. :)

Yep, I'm with Jason, Jan. I really don't like cheesecake at all. Unfortunately tons of people I know do, which makes it necessary to hang onto this one. I like that it's super easy and I can easily change the type of cheesecake (not just making it a sopapilla kind).