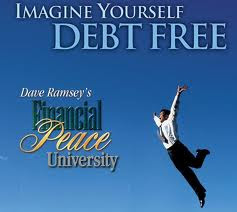 We've been on the path to getting out of debt for a few years now and we're finally to the point that we can see the end. I keep describing this feeling to people as "anxious desperation." We're so glad God finally bopped us upside the head so we get it now, and we're making wise, God-honoring choices financially.

No one can serve two masters. Either you will hate the one and love the other, or you will be devoted to the one and despise the other. You cannot serve both God and money. ~Luke 16:13 (NIV)

We've been slaves to our debtors for our entire marriage (over 9 years), but we're almost free! About five years ago or so, our church got wise to the fact that 'how can our people be generous with their time, talents, and gifts if the church isn't?' So our church paid off the mortgage, got out of debt themselves, and now we have been able to put more of our funds into city-reaching and community outreach. It's been a wonderful thing to know they're not just preaching it, they're doing it!

The main educational info. we use as a body is from Dave Ramsey. 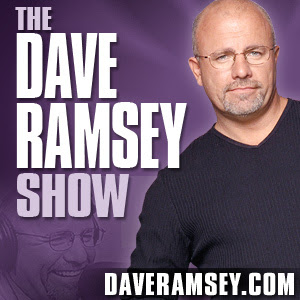 For those of you who don't know who Dave Ramsey is, he's a cool Christian dude with very smart principles for managing money and investments, etc. To me, I like the guy because he had gagillions of dollars, went bankrupt from stupidity, and learned the right lessons the hard way. His Financial Peace University material is what we use here at Crossroads. To be honest, I've only done the one-day seminars, not the entire class, but these are the baby steps to help you (or whoever) get started: 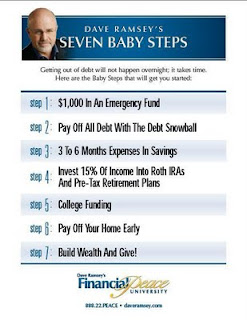 Basically to start, you save an emergency fund so you avoid amassing more credit for emergencies that come up (car problems, an unexpected bill comes in, medical copays, etc.). Once you have your emergency fund saved up, then you start hitting your debt. We used to pay more than the minimum payment on all our debt, which is great, but makes for a much slower, more agonizing process. Dave suggests using the "debt snowball" method, which means you take all your extra money (the amount you decide to put to paying off debt above the minimums), and put it all to one debt at a time. Once that debt is paid off, you take that extra money plus the minimum payment of what you were paying on the now-paid-off debt, and put it to another debt. Repeat until debt is gone. The other baby steps happen after all that, which we're not truly to yet.

We are attacking our first of four debts left to go. We will have paid it off in December, but we're hoping to pay it off by Thanksgiving (happy early Christmas to us!). This is our longest debt we've had (outside of student loans) and we will probably bawl in happiness once it's done. After this one's paid off, we'll have two smaller debts to be paid off and then all we'll have are our student loans.

So to summarize, six months from now, we should be completely debt-free except for our student loans! YAY! Thus, the anxious desperation I described earlier. So close I can see it! But we still have to be wise and not blow it to get there! So we're excited, but desperately trying to stay obedient. No new toys for a year, we said earlier this year. That means no iPads, no new phones, no huge expenses we don't need. A hard thing when you see the cash in the bank and have the itch to burn through it. But God's reward is so much longer-lasting and better than any of the latest techno stuff.

Can't you just see it? God as our only master. Life will be that much sweeter in the end.
Posted by Susan at 9:00 AM