I know, I know. I've got about four or more posts rattling around in my head that I'm SUPER behind on. For now though you'll have to deal with this one post. It's been a crazy season and I'm still playing catch up.

It's the end of March and that means the beginning of my official 5k season for the year! I always have such grand plans to do at least one official 5k each month, just to stay with the running and keep myself accountable. That really is almost never how my life actually goes, but this morning I did my first 5k in a really long time! (Wow! Apparently my last run was six months ago. That is so sad!)

I of course had big plans to train every day, or more realistically in a pinch, every other day so I would feel completely in my element doing this 5k. This one today was really important to us and I wanted to do it well. It was important because we were running for our adoption agency. Well, CC is still relearning how to walk and stand and drive, so of course he couldn't do the 5k today, though he still came out to support me which was wonderful as always.

(Sidebar: It is sooooo amazing to have my husband and bff cheer me on in being healthy and supporting my goals to spend his hard-earned money on races!)

My training didn't go so well, mainly for all the other blog post reasons I haven't written yet, but I was at least hopeful to run a lot this past week in anticipation of the 5k. That didn't really  happen either so I was pretty anxious going into today's run. Hubby as ever, saved the day by reminding me last night that this 'was just another workout' which I could easily handle. I get all wrapped up in the official time record and the masses of people and he boils it down each time for me to it being just another workout. Such a helper that one!

Today has been super rainy and therefore wet. It's not as warm as it was supposed to be, but still a bit mild. We kept praying that the rain would let up and not be monsoony during the actual run, AND IT WASN'T! How cool is that?!

I never once saw anyone hurt or ill on the side of the course which was a first for me. Made it kind of nice to have so many volunteers and 'cheerers' on the course!

I finished AND crossed the finish line at 41:30! Woohoo!

I had a friend running in the same race for her first 5k and she finished about five minutes ahead of me. It was fantastic to be a part of her first 5k experience! Today was such a great reminder of why I love running so much- I hate the build-up to it, but I find running so addictive!

I can't wait to find my next race to sign up for and I REALLY want to do a 10k and a half marathon in the next year. Wouldn't that be something for this reformed couch potato?!

Below are the photos my friend took of today's run. I'm so thankful he got these for me- I love having each accomplishment documented!

The before (my new favorite photo): 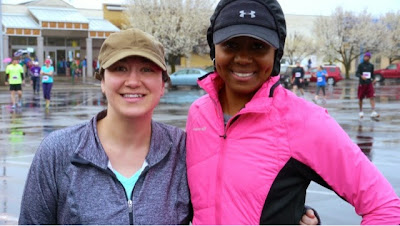 More of the before, waiting for the start! 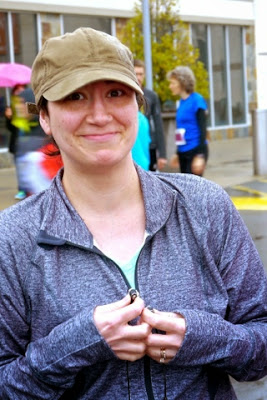 This is the after, trying to stop my iPhone apps now that I was FINISHED! 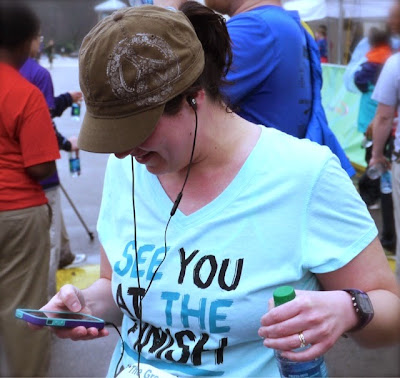 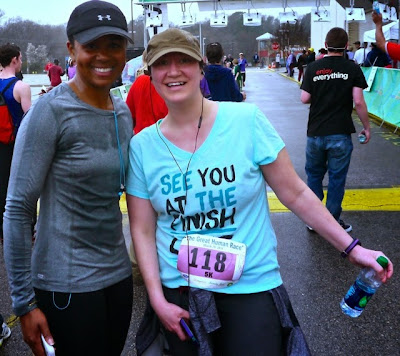 Can you see how red my face was? It happens. The completed goal is so worth it! 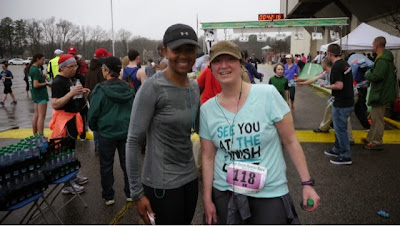 So proud of you!!